Those that have read my posts know I tend to concentrate on GCSE English but after Ofqual's recent report I have to turn my attention to Mathematics in 2018.


Ever since August 2012 I have followed GCSE outcomes.  That summer was the year that Ofqual and the Dfe changed GCSE outcomes and really put an end to years of grade inflation. It was a summer that changed my view on the "system".  A system that at times appears to be unfair.

Ofqual then set about setting up a system of comparable outcomes.  How it now works is that every year the exam boards in July send there outcomes to Ofqual with the expected outcomes based on Progress from Key Stage 2.  The exam boards are under extreme pressure to make sure the outcomes match expected.  Ofqual now has a strangle hold over the boards.  This is achieved by the importance of "the list".

To gain points that count towards Progress 8 schools have to choose only subjects that are approved by Ofqual and added to the list.  If a course is not on the list it will cost the exam boards a great deal of money.  (I will not on this blog talk about how bad it is that the list is produced so late - that is so obviously wrong and shows how Ofqual have no idea how long it takes to design and implement a curriculum, you will have noticed that 2021 has not yet been published and options evening will start after Christmas).

So we move to 2018 Maths.  Ofqual spotted the problem of comparable outcomes based on assessments that are 5 years old and some state are unreliable.  They then introduced at additional costs the National Reference Tests to be sat by year 11 Pupils that could be used to "allow" exam boards to increase pass rates if pupils performed at a higher level.  In 2018 Ofqual stated "In maths, NFER report a statistically significant change, which suggests that student performance has improved slightly."

In the same set of Reports Ofqual published the comparability graded for Maths.  This showed that for the two boards with most entries for Maths they exactly equalled the expected outcomes from Key Stage 2.

The progress remained the same and the outcomes only went up by 0.3% not the 2.4% that could have been expected,  this equates to 10,329 pupils receiving a grade 3 rather than a grade 4.

The impact on the lives of these pupils is significant.  I understand the "second year" effect but at Key Stage 2 in the second year outcomes were increased to reflect this.

The question is whether the millions of pounds being paid to exams boards and our exam board regulators Ofqual is value for money when it does not appear to be delivering a fair system.

Assessment Manager Set Up and Training

If you would like help setting up or using Assessment Manager more effectively do get in touch.  A large part of my work is creating Excel ad-dons that automatically create the dashboards that many schools find useful.

SIMS Assessment Manager has the flexibility to support almost any assessment system.  It's power comes from its direct link to the timetable and other pupil details held in SIMS.

Set up can take some time but once done is a good solution to both whole school and departmental assessments. 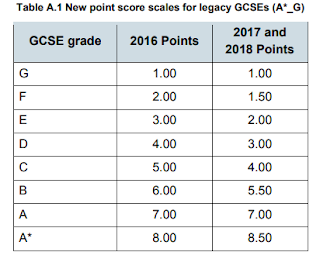 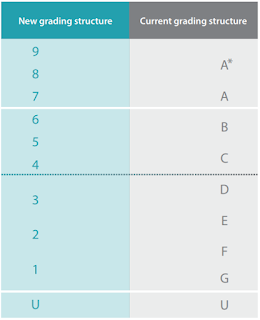 Last year the impact of IGCSE English results without any reporting tolerance added to them was significant on the overall outcomes for all learners.  In the summer action was taken by the great and good to ensure that IGCSE English outcomes were kept sensible though this had varying consequences for pupils and schools.  This year the problem has started early and our friends at the Dfe need to take a wee look at it.

Ofqual have helpfully as ever released this
https://www.gov.uk/government/statistics/november-gcse-and-level-1level-2-certificates-entries-in-England

I have asked Ofqual to provide the number of entries for the last 3 years for November IGCSE.  The Cambridge International Examinations Board refused to give me this information.  The claim at a PIXL conference was that schools were reporting an 80% pass rate from November IGCSEs.  It actually came in at 71.1%   These results were not compared to Keystage 2 results and were certainly not assessed against the new national reference tests.

Over 41,000 pupils from this Cohort have taken this exam in November.  This means almost 30,000 pupils have already passed the exam.  This will be approximately 8% of the cohort.  I do not know if the IGCSE will this year be subject to reporting tolerance in the summer of 2016 - it has to be if the system is to retain any hint of fairness.

So what happens from here.  The pupils who sit GCSE English in the summer 2016 should be treated fairly.  They were not in 2015.  All exams should be made to go through the reported tolerance exercise.  This year the progress 8 calculation for schools has to be done twice -once including IGCSEs and once without.  It was so unfair that Raise on Line was published last year with absolutely no reference to the English GCSE farce of the Summer of 2015.

I await the response from the great and good of Education.

Thank you to Ofqual for their latest report on the issues that took place last summer, published at the end of December.

The following two paragraphs go some way to show the issues that took place,

The other factor that made awarding more challenging was the bunching of marks, particularly around the C/D boundaries. On one paper, the difference between C and A was only 4 marks. We concluded that Cambridge International had carried out its grading appropriately. Cambridge International has carried out further analysis since the summer and is confident that their grading was appropriate."

Next I will look at the November 2015 entry pattern and results.

I presume but do not yet know that Ofqual will insist that Cambridge International have to provide progress tolerance statistics in 2016.


Why has Pearson with a lower expected outcome come out with a higher pass rate than AQA?

To allow one set of Qualifications to have no reporting tolerance is just remarkable.  Schools have reported the Coursework for IGCSE was marked down but without the above information there is no way I can show what this blog hopped to achieve.  They did have a slight drop in the pass rate but I am as convinced as before that this would not have been reflected in the expected progress figure.

The new Ofsted data dashboard certainly looks like it will take prior attainment into consideration but I feel the table above still shows the results that it is based on can not be used to show a true reflection of all pupils progress.

Thanks for reading
Chris Beeden

The GCSE results are now public and thank you to JCQ for the following information.

It states there has been a 2.5% increase in the pass rate for GCSE English for 16 Year olds,  This is higher than the 1% I was worried would be the case but not near the 7% that could have been expected given the 7% swap to IGCSE English. As stated I have asked Oqual to release the progress for each board for both GCSE and IGCSE.  I am still convinced there is no standard across the two types of exam.   I will publish this data when I receive it.

The Dfe must now check and then publish in Raise on Line all the progress measures including and excluding IGCSEs.

Thank you for reading

Chris
Posted by Unknown at 09:50 No comments: